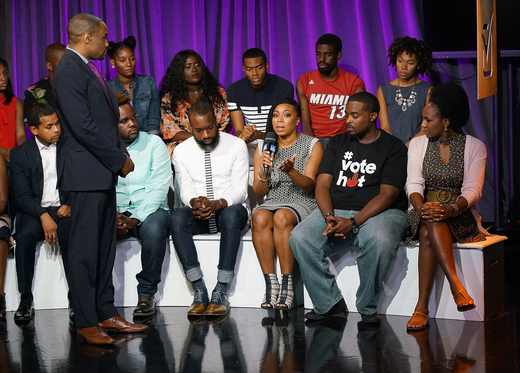 Last night, BET (a client, full disclosure) ran an hour special entitled 5 Things You Can Do To Change Sh! (the Sh! at the end does not stand for 'quiet in the library).  It was produced by my old friend Eugenia Harvey - and congrats on a great job.

He show was a 'town hall' type forum hosted by Marc Lamont Hill, author of of

Nobody: Casualties of America’s War on the Vulnerable, from Ferguson to Flint and Beyond.

The object of the discussion was how to change the atmosphere of fear and hatred.  In a nutshell (and from USA Today):

"We have to change policy so that police are more invested in maintaining peace in neighborhoods than policing minor crimes. And we have to go into our psyches. It's not necessarily that officers have bad intentions or that they're racist. Studies show that police officers tend to look at black boys as older and more guilty then they are. So when they see a 12-year-old Tamir Rice with a toy, they do see a 20-year-old man with a gun. We have to change how people see black men and women, boys and girls. And as policies and attitudes change, then communities can have more faith in the police.

This is all fine and admirable in so far as it goes, but as I said, it got me to thinking.

Most of our awareness of police violence, particularly towards black Americans is, more than anythnig else, a function of iPhone technology.  Now, for the first time, everyone (more or less) is carrying an iPhone, whch is both a video camera and a TV studio in your pocket.

That is enormous power.

We are aware of things like Michael Brown or Eric Garner or Tamir Rice (or a hundred other ones) now because we can see them. Most likely, they were happening all the time, just in the dark.

When I think back on the Los Angeles riots of 1993, it was only because  George Holliday happened to have a VHS camera and caught the police beating King.  It was a kind of an accident, in a way.  Happenstance.  But it showed people what was happening in a way with which they could not argue.

Up until now, we have used video for this kind of 'accidental" catching things.

Then come the marches.  BLM was such a marching response. But marching is very 1960s. The idea is to create a march so that the cameras come from CNN and NBC.

But with millions of people who have iPhones in their pocket and the internet, you don't need CNN or NBC anymore.  And video need not just be 'accidental'.

Television and video are remarkably powerful media, and there is no reason that they have to be left in the hands of CNN or NBC or (not to bite the hand that fed me), BET.

The trick is to use it.

Create video - all the time. Put it on the web all the time. Express your anger. Flood the blogosphere with it.  Share your feelings and ideas in this most powerful medium

You don't have to wait for BET or CNN to give you one hour (Sorry Eugenia, you know I still love you), but the future calls.

It is there for the taking.