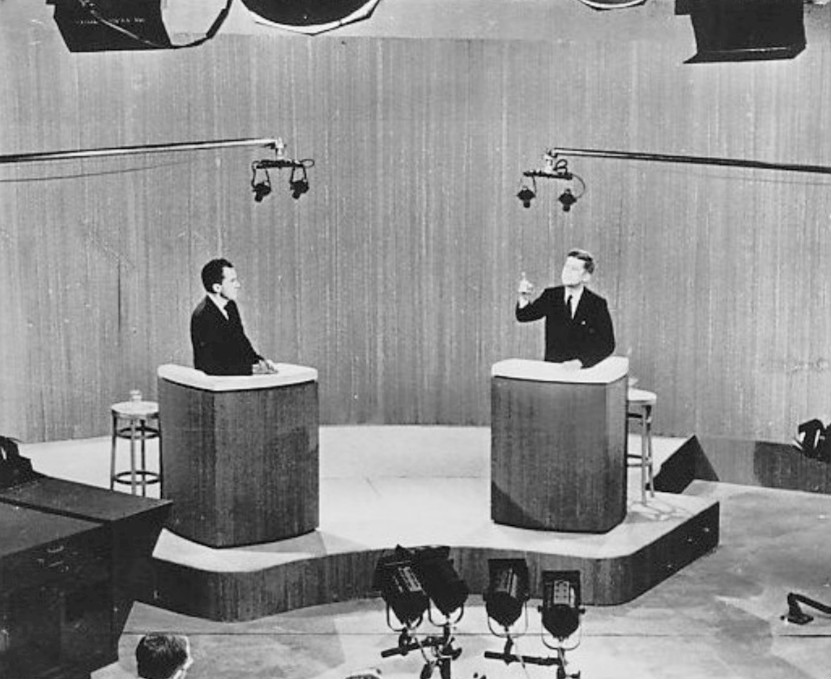 The GOP Presidential debate in Texas last week looked more like a TV game show or a reality show than anything Presidential.

I am hardly the first person to mention this.  The slugfest was an obvious embrassment - more like a schoolyard brawl than having anything of any value in the world of public discourse.

Why is this happening, and more importantly (for us, at least), what does this mean for video journalists and why should we care?

The notion of Presidential debates have come a long way (all downhill) since Nixon-Kennedy (or the famed senatorial contest of Lincoln Douglass).  They are framed more like TV game shows or reality shows, closer to The Voice than the voice of the people.  Music up, dramatic lighting, flashy sets and the enthused V/O. The style is more WWF than anything else.  Who will win? Who will lose? Who will be left after this brawl?

The locus of all of this is the obvious question - how in the world did Donald Trump, a TV Reality Star, get to be the seemingly next Republican candidate for the Presidency?

These things are all related.

In 1961, at the moment of leaving office, Dwight Eisenhower, President, warned the nation of the dangers of what he called the Military-Industrial Complex:

"In the councils of government, we must guard against the acquisition of unwarranted influence, whether sought or unsought, by the military-industrial complex. The potential for the disastrous rise of misplaced power exists, and will persist."

Today, the danger, I would suggest, is not from the Military-Industrial complex so much as what we might call the Television News - Politician Complex.  The very close and symbiotic relationship between the candidates and the 'news'.

The TV news business has become a business. A money-making business.

This was not always the case. In fact, TV news was the price the networks were supposed to pay, as a public service to the nation, in exchange for their broadcast licenses.  They were supposed to lose money.  Ken Auletta documents this and the transformation to news being seen as 'for profit' in his excellent book, Three Blind Mice.

And once the news shows had to make money, they had to seek ratings.  The better the ratings, the more you can charge for ad space and the more money the news shows make.

Donald Trump is a ratings machine.

He is a gift from God for the news shows, who normally languish in ratings.  The crazier Trump sounds, the more outrageous, the more people tune in to see the next car wreck, the higher the ratings.

It was and is a perfect symbiotic relationship.

Trump got free publicity, the networks got their ratings pop.

They loved each other.

Landed a blow?  Shades of WWF.

Every network news organization knew about Trump University and about his various lawsuits over the hiring of illegals.  Did one of those networks, in all of Trumps thousands of appearances on network news and at the other 'debates'... did one of them ever ask these obvious questions?

Because they don't want to kill the magic man who keeps their ratings sky high.

This is not about journalism. This is about money.

This is not a free press.

This is an oligopoly.

A small handfull of companies that control access to somethig we consume daily. In one case, oil. In the other case, news and information.

Well, if you can't depend on the news oligopoly (call them ONEC - Organization of News Editing Companies) to do the journalism, then whom?

Your iPhone or video camera is the 'fracking device' for journalism.

It is the instrument of a free press.

No one has your interests more at heart than you.

This was never possible before, but now, the technology, between iPhone videos and the Internet have turned over the 'power' of broadcasting and news and journalism to everyone.

It is in your hands.