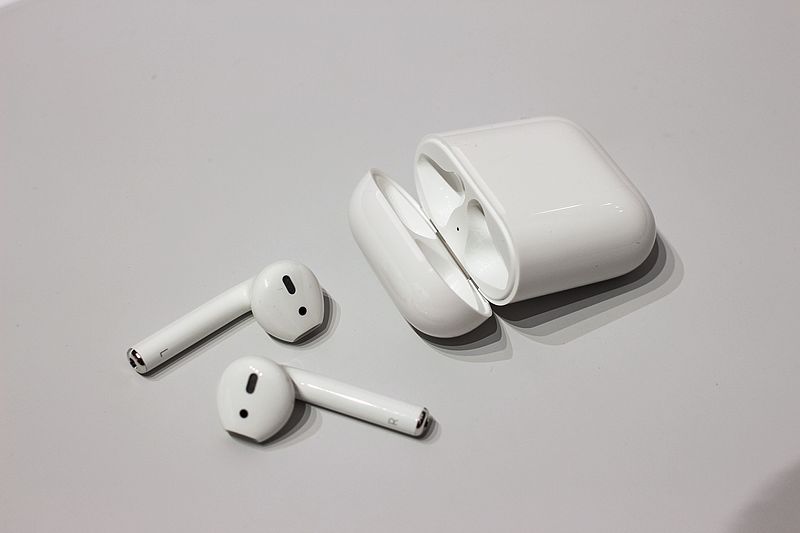 CNET: Apple AirPods after a week of use

Undoubtably the most talked about and debated aspect of the new iPhone 7 is the absense of the headphone jack.  People have been up in arms about the decision to remove the standard headphone jack, accusing Apple of conning customers to have to buy more adapters and accessories. The other side of the argument is that this is just the next step in a world that is becoming increasingly wireless.

You may be left wondering without a headphone jack how one would be able to listen to music or podcasts on without blasting them through the speaker, and Apple has given its users two options.  The first is to connect via the lightning charger port, with either a direct connection or using a standard headphone jack to charger port adaptor that Apple is making.  The second is to use a bluetooth wireless headphone set, or better yet, use the ones that Apple is making -- The AirPods. The Airpods were instantly derided by people around the world.  People took issue with the design and functionality before they were even released.

I was one of the world's first normal people to be photographed wearing Apple's AirPods. Shortly thereafter, I became a meme. Or rather, Apple's weird-looking earbuds did -- I was just the ear model.

These little 'buds have become poster children for the awkwardness of wearable tech design. Noooope, the internet said. Instagram, Reddit and Twitter comments compared them to objects ranging from cigarette butts to tampons. Consensus: People think they're ugly.

But let's back up a bit. As everyone already knows, the new iPhone 7 and 7 Plus don't have a standard headphone jack. You need to use the Lightning headphones, or the Lightning-to-minijack dongle, both of which Apple mercifully throws in the box. (But still, hey, no headphone jack.)

Of course, what Apple is really trying to do is condition you to an all-wireless world. Wireless Bluetooth headphones have been around for years, and they've gotten quite good. Beats, Apple's own fully owned subsidiary and the largest headphone brand on the planet, already sells plenty of wireless headphones, including three all-new models that debuted alongside the iPhone 7 and 7 Plus.

How dumb did I feel?

AirPods feel like regular EarPods, but wireless. So, since I can't see them while I'm wearing them unless I look in the mirror, I generally feel fine (until the internet uses a photo of me to demonstrate how silly they look. Details, details).

Then I look in the mirror. One AirPod looks like a futuristic Bluetooth headset. With two in place, they look like hipster earrings. Or tiny vape pipes. Or sci-fi jewelry. Or worse.

OK, AirPods look ridiculous. I don't know why Apple put that weird tail on them, except maybe for an antenna, or to make the microphones better. (More on that later.)

How do they sound?

Here's the thing: Mostly, they're good. I liked listening to music with AirPods. I started finding myself preferring them to plug-in headphones, thanks to the freedom of movement they provided.

Until, of course, they produced some of the same little pops and interruptions I always get from Bluetooth earphones when I'm walking. I didn't seem to get quite as many with the AirPods, but they sometimes happened...and the skips and interruptions made me wish for something wired.

The 5-hour battery life for the earphones isn't great, but it's good for earbuds this tiny. And the little dental-floss-box-looking charger not only packs enough total charge for 24 hours, but quick-charges them fast enough that I never worried about running out of juice in a day. Or even two. Or three. You just need to accustom yourself to swapping the buds back into the case when you're not using them. And don't expect to listen straight through on, say, an intercontinental flight without an extra boost from the case.

Will AirPods work with other Bluetooth devices?

Yeah, they're Bluetooth headphones. They'll work with any Bluetooth-enabled smartphone, tablet, computer or other wireless device. I paired them with the Galaxy S7 Edge, and they worked fine for music and calls. But when you use them with Apple devices, you get some extra special features such as auto-pairing (see below). In Bluetooth mode with non-Apple devices, the AirPods won't turn on or off when you remove them from your ears, either.

Read more of his report here.