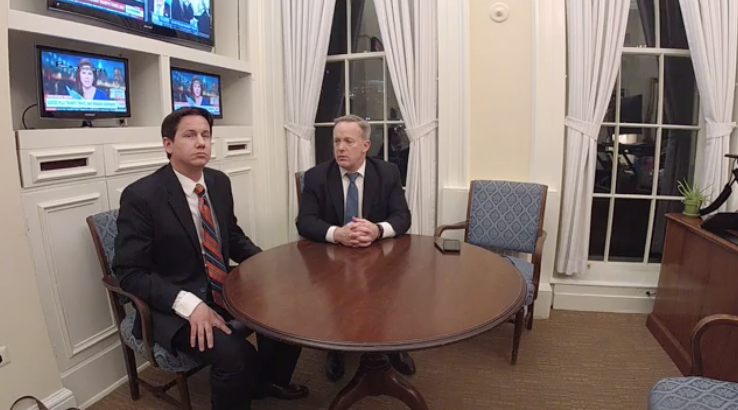 Take a look at this absolutely appalling piece of video.

This is Charlie Spearing, White House Correspondent for Breitbart News. He is doing a live (so far as I can tell) interview with Sean Spicer, Presidential Press Secretary.

This video 'aired', if that is the term, live, on Breitbart's FB page last week.

I am not going to get into the content. I am only going to discuss the production values.

Just because you are going live on FB (or anywhere else online for that matter), is no excuse for shoddy and amateurish worksmanship.  People who are watching you also watch TV network news and go to see Hollywood movies. There is an inherent expectation of at least a modicum of professional production, even if you are working with an iPhone - which they are not.

In fact, this seemst to be a multi-camera shoot, with a switcher no less (as this is live, or so they say)

They seem to be lost at the start and they remain lost through out.  The audio is terrible. This is the White House for crying out loud.  From what I can see in the reflection in the window, there is at least one large camera which must take XLR inputs. Mic the two of them!

The camera angles are appalling.  We are looking down Charlie's ear canal for most of the video feed.

Absolutely the most rubbish, amateur video I have seen in a long time. If these two guys were in one of my video bootcamps, they would definitely be on the wrong end of our daily 'public praise, public humiliation' sessions.

That is comes from the White House is well, just embarssing.  I would NEVER have let this out.  Bad production, regardless of the content, degrades the viewer's percption of the content itself.

However... should they choose to sign up for TheVJ, I think we could help... at least on the production quality side.