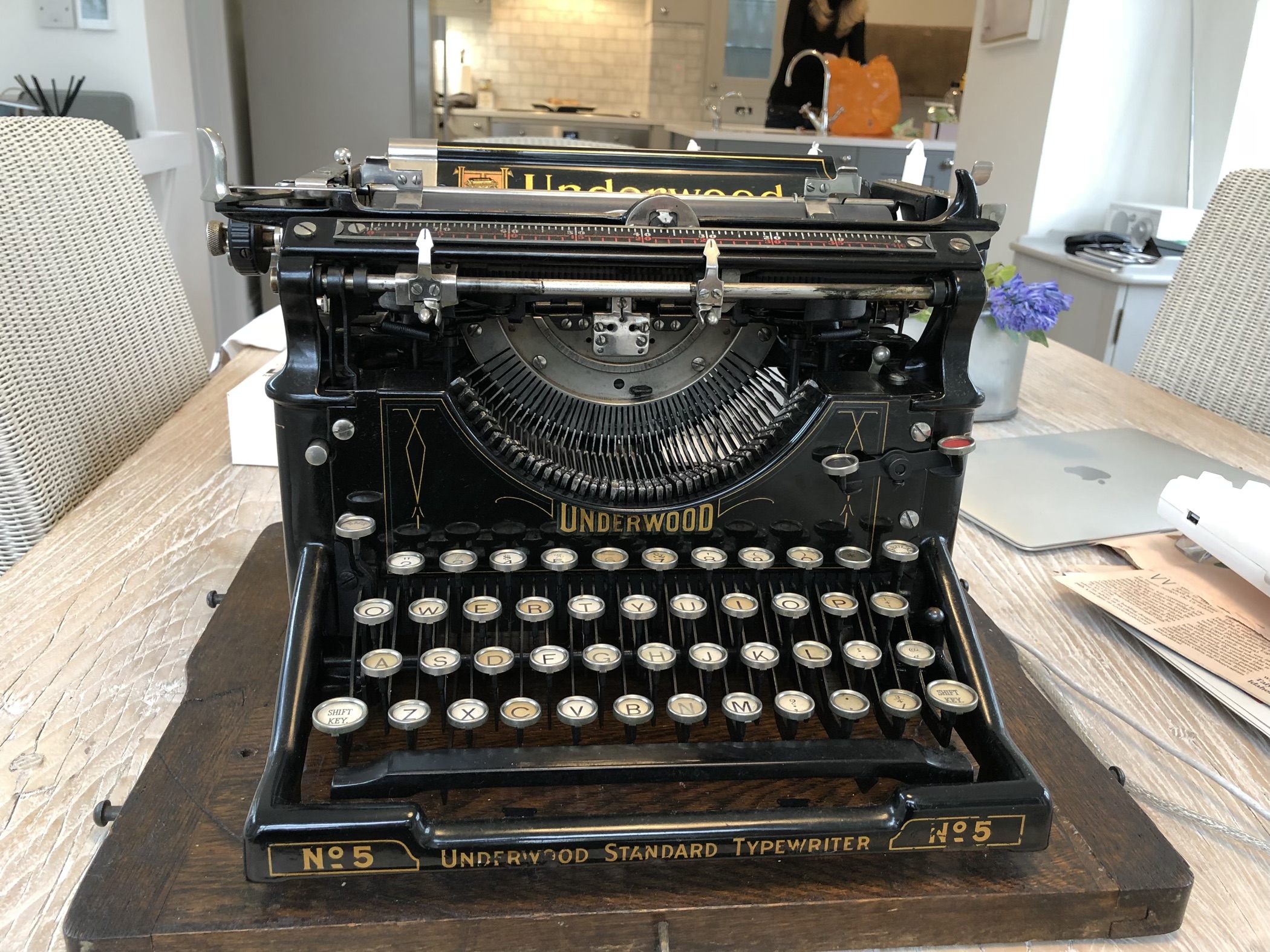 I have spent my life in the world of video, media and digital images, so it was something of a surprise when Lisa bought me a 1912 Underwood typewriter for my birthday a few years ago.

The machine was built in the same year as the Titanic, but unlike the ship, my typewriter is not only still afloat but also still works.

Writing on a world processor means that you are able to delete at will. Write a few words… don’t like them? Erase and start again. Working in this way, over time, we become conditioned, in many way, to writing without thinking. This would account for many a tweet that has been written in haste and later regretted, and sometimes destroyed careers.

Writing on a typewriter requires thinking before you hit the keys. It’s a novel experience. Technology has allowed us to bypass a part of our brain that edited and censored what we wrote before we wrote it. It is also a part of our brain that composed far richer, in my opinion, prose that the instantly banged out work of Microsoft Word. When each strike of the key means a commitment to a letter or a word; a sentence of a paragraph that cannot be easily erased (there is only so much white-out in the world), you have to think ahead. You have to envision the story before you start to write. Ironically, this is very much the same process that we teach for video storytelling in our bootcamps, and why we drive home the idea of shooting 1:1. Think before you write - or shoot for that matter.

Of course, in my youth all we had were typewriters. In high school, we were all required to take a course in touch typing, and thank you Miss Chaffee for getting me up to 60WPM, which I can still do. My first job at Good Morning America was sitting all day with headphones and transcribing interviews, on a typewriter. When I went to Columbia University’s Graduate School of Journalism (class of 1983) we still had manual typewriters.

When I work at home, I still love the clatter of the keys and the resounding sound of the bell as you reach the end of the line and have to throw the carriage by hand. There is something enormously satisfying about the sheer physical aspect of writing on a typewriter.

But there is something else, and this is perhaps the most interesting aspect of this - the impact of a typewritten letter.

I have built my business over the past 30-odd years by writing directly to CEOs to pitch my services. It is a lesson I learned from my rabbi in the world of business, Carl Spielvogel, who starting with nothing built the largest ad agency in the world. Carl told me, “only talk to the CEO. Anything else is a waste of time. If the CEO likes the idea, you are done. And, if the CEO doesn’t like the idea, you are also done. Saves time.”

The problem with that approach is getting in front of the CEO.

I can assure you that an email to the CEO of any major company is going to be deleted before it is read, with a few rare exceptions. However, I can also tell you, from personal experience, that for some reason a typewritten letter, sent in a typewritten envelope not only gets read, it often elicits a response, and from time to time, a deal.

There is power, not just in the process of crafting the written word on a typewriter, but also in reading it. The written world seems to convey a power of its own to the reader.

I am in the process now of packing up my home in New York for a far more permanent move to the UK. All this week, I have been packing up my library for shipping to Britain.

I like a printed book, and over the years I have collected more than a thousand of them; maybe two thousand. Like the typewritten letter, there is an inherent power in a hard cover printed book that I just don’t feel with an e-reader. I like the feel of the book; the weight of it, the smell of the paper and I like to write in the margins. Years later I can still pull a book that I have read off the shelf and find a quote or a note that I am searching for.

But maybe it is just that I am old.