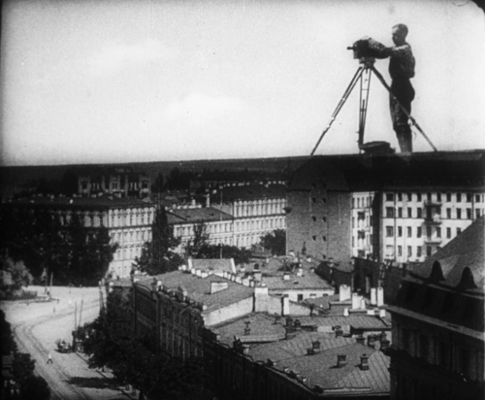 Man With A Movie Camera

When we run our video bootcamps, we try and emphasize the need to use the camera to create a sense of intimacy - to try and have the viewer feel that they are 'in the moment' that is being filmed, as opposed to 'watching the moment' from a distance.

A great deal of this ability to create intimacy on the screen is a function of working with smaller and less obtrusive cameras - particularly phones.

I often like to look backward to what a new generation of photo journalists were able to do with Leicas in the 1930s nd 1940s, creating an entirely new kind of photo journalism, one that was manifest in both Life Magazine and Magnum.

However, a revolutionary Soviet filmmaker named Dziga Vertov (his actual name was David Abelevich Kaufmann) and his wife Elizabeta Svilova were on the cutting edge of this kind of approach to filmmaking in the 1920s, at the very birth of cinema.

You can read all about it on wikipedia, and below is a link to the complete work, which requires a bit of patience, as it is without sound, and we are accustomed to far faster moving stories, but view it as an interesting historical document and put it in the context of 1929!

The highlights that make this so interesting:

Vertov's feature film, produced by the film studio VUFKU, presents urban life in the Soviet cities of Kiev, Kharkov, Moscow and Odessa. It has no actors. From dawn to dusk Soviet citizens are shown at work and at play, and interacting with the machinery of modern life. To the extent that it can be said to have "characters," they are the cameramen of the title, the film editor, and the modern Soviet Union they discover and present in the film.

Man with a Movie Camera was largely dismissed upon its initial release; the work's quick-cut editing, self-reflexivity, and emphasis on form over content were all subjects of criticism. In the British Film Institute's 2012 Sight & Sound poll, however, film critics voted it the eighth greatest film ever made, and the work was later named the best documentary of all time in the same magazine.