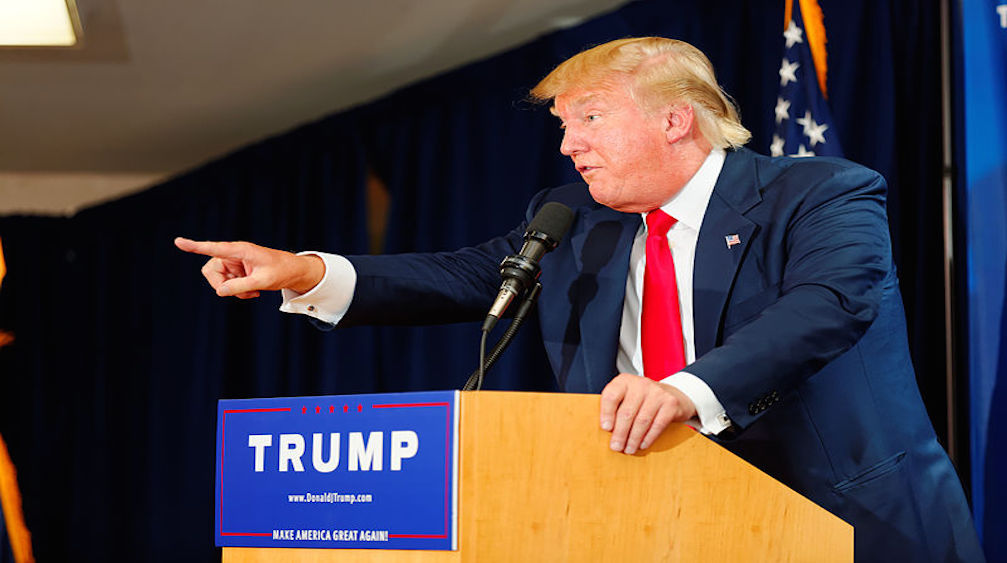 This is hardly news.

Donald Trump says he saw thousands of Muslims cheering in Jersey City when the World Trade Center came down.  He says he saw it on TV, even though there are no records of this ever happening.

He says he saw people jumping out of the windows of the World Trade Center from his apartment in the Trump Tower on Fifth Avenue.  That would be a fairly remarkable sight (eyesight).

What is extraordinary here is not that he lies.

"I did not have sex with that woman."

And, I am not here to castigate Trump. There have been plenty of people doing that already. Mostly in newspapers and even more online.

Where they have not been castigating him is on the TV network news.

I was quite astonished to watch George Stephanopoulos question Trump on the veracity of his cheering Muslims in Jersey City claim:

Now, I know they don't like to talk about it, but it was well covered at the time.

There were people over in New Jersey that were watching it, a heavy Arab population, that were cheering as the buildings came down. Not good.

STEPHANOPOULOS: As I said, the police have said it didn't happen. But what I want to move on right now."

I want to move on is not exactly the kind of hard edged questioning that this kind of claim warrants.

It is not the kind of 'let's get past this unpleasantness' Q&A that Jeremy Paxman would conduct on The BBC.  He is a killer. He is unrelenting.

But nobody else on network news is either.

But there is a reason for this.

Trump brings in the numbers. He is a ratings machine. The networks love him.  They love him because he can generate viewership in a way that Bush or Rubio or Hillary simply can't.

So Stephanopoulos is in a bind.  He probably would like to go after Trump, but he also can't annoy Trump too much, or Trump will refuse to appear on his show again and then the ratings go into the toilet.

So we have to live with a kind of television journalism circumscribed by ratings.  It's a strange marriage.  But there it is.

Which brings us to the VJ.

Until now the only people who could 'make' television journalism were employees of major networks. That was because making television and getting it out to millions of people was extremely complicated and expensive.

But the Internet and the digital revolution have changed all of this - or at least have the potential to change all of this.

Online bloggers and online sites have no hesitation in going after Trump and others.  You can read a great piece (amongst many) on this subject by Dylan Matthews for Vox.com here.

This is becasue the 'digital revolution' has opened the door to anyone who wishes to publish their opinions (or fact checking) online.  That same revolution is now knocking on the door of television - and in this case - television news.

The barrier to access is coming down.  Strangely, your iPhone is as good a node for 'broadcasting' as a network studio.

This is the power and the potential of the video revolution.  It gives everyone the abilty to 'publish' in video. Now just George Stephanopoulus (nice guy that he is).

Let's look at it this way: Vox, which is what we are talking about although in text, has a valuation (as of this August, and according to Forbes) of $1 Billion.  A bit less than The NY Times.

You see what I am getting at.

The potential for taking 'new video' online is enormous, and just getting started.