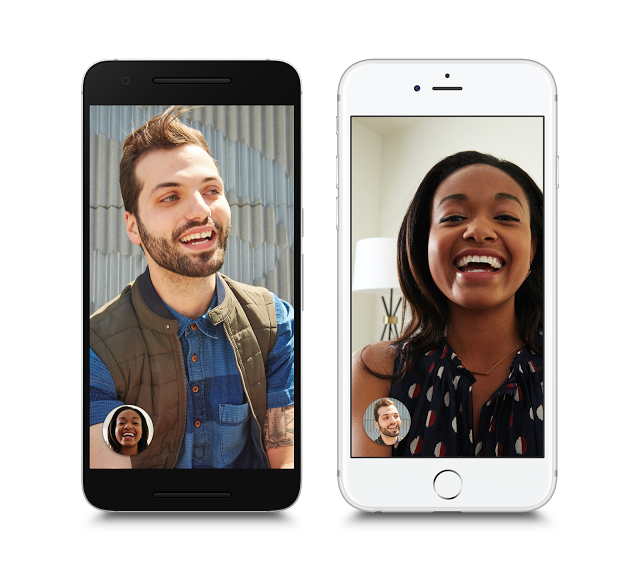 Google announced this week that it is releasing a new video calling app for Android and iOS.  Google and Apple have long fought over dominance in your pocket.  When it comes to smartphones the two are sworn rivals.  Their respective approached to this rivalry, however, is different though.

Apple's approach is to keep the user as much constrained within the Apple ecosystem as possible with many Apple provided options to make their devices useful.  Google on the other hand, while they make phones and an operating system, more so try to make apps and software that can be used across devices no matter the operating system.  The app is simple and all you need is a phone number for it to work.

With the release of their new video app, Duo, Google continues this strategy along with apps like Maps, Music, and Gmail.

BRIAN X. CHEN for NYT has the story:

On Tuesday, Google underscored that strategy with the release of its latest mobile app: Duo, a video-calling app that is a direct alternative to Apple’s FaceTime.

The app fits squarely into Google’s playbook in mobile. Over the last few years, Google has increasingly offered its important software and internet services, including Google Maps, Google Photos and Google Docs, to iPhone customers. All of those apps were compelling alternatives to Apple’s proprietary apps, like Apple Maps, Photos and Notes, because they work on a wider variety of devices, including Macs, Windows PCs, Android devices and iPhones.

Duo is no exception. People can only use FaceTime to call others who have Apple devices. But Duo lets you place video calls between Android and iPhone users, and sizably increases the universe of people with whom you can hold a video conversation.

“You shouldn’t have to worry about whether your call will connect, or if your friend is using the same type of device as you are,” Google said in a statement, in a veiled jab at Apple. “It’s no wonder that nearly half of U.S. adults never make video calls on mobile.”

All of this feeds into Google’s strategy to attract iPhone users over to Android. Google’s apps generally work better on Android devices than on iPhones, so the more that people get hooked on Google’s core apps, the less incentive there is to stay loyal to Apple.

Nick Fox, Google’s head of communication products, said the top priority with Duo was to build a great product and to increase the use of video calling among Android users. But he added that making Android more attractive to iPhone owners was a secondary motive. He said that Duo’s appeal was that it was simple to use, fast and more widely accessible.

“Our view is video calling should work for everybody,” he said. “If you can only call half the people you know, that’s very limiting.”