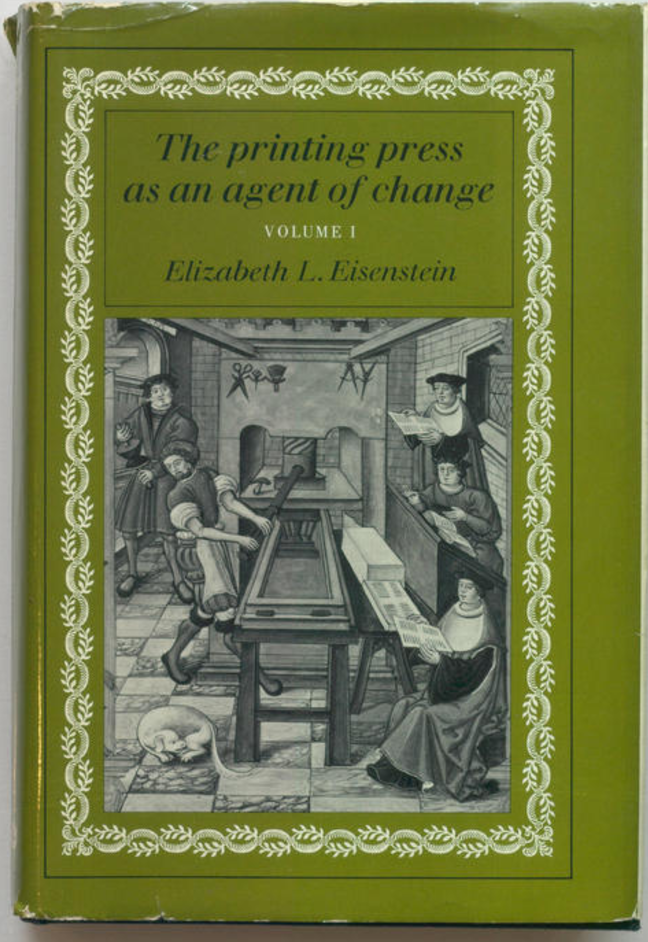 The Printing Press as an Agent of Change by Elizabeth L. Eisenstein

The Printing Press & The iPhone

I have been reading The Printing Press As An Agent Of Change by Elizabeth L. Eisenstein (Cambridge University Press 1979)

A few years ago, as the Millenium approached, Time Magazine devoted an issue to the '100 greatest inventions in history'.

Needless to say, were many entrants - the electric light, the automobile, the computer, but the number one invention was: The Printing Press.

This is not surprising.  The electric light, the automobile, the telephone all allowed us to do what we had done previously, only faster or with less effort.  But the printing press did something else - it changed the very nature of society.

Eisenstein's book, probaly the seminal study of the impact of the printing press, (at 800 pages, vols I&II) lays out quite clearly just how the arrival of a machine that allowed information to be both reproduced and distributed turned society upside down in a way that nothing else ever has (though the Internet may become a close competitor).

Gutenberg made his first experiments with moveable type and printing in 1440.  He did it more out of economic necessity than antyhing else.  In 1439, Gutenberg had lost a fortune in a misbegotten business venture involving polished metal mirrors which were supposed to capture 'holy light' reflected from religious relics.  Gutenberg's idea was to produce them and then sell them to pilgrims. They didn't sell, leaving Gutenberg deeply in debt.

The locus of pretty much everything the 15th Century was the Church, and if Holy Mirrors weren't going to sell, may be bibles would.

The problem with bibles at that time was that they were astronomicaly expensive to produce - each one had to be laboriously hand-written by a monk or a scribe. One bible could take more than a year to make.  Clearly, this was not going to be a voume business.

But Gutenberg, the Holy Mirror salesman had actually trained as a goldsmith and so had some capacity in using tools to craft small metal precision items.  In this case, Gutenberg came up with the idea of crafting individual letters in metal.

Gutenberg's idea was to repalce his Holy Mirrors with cheap bibles.  It took him four years to figure out how to use his new printing press to manufacture bibles that were cheap enough to sell to pilgrims, but he succeeded far beyond anyone's imagination.

In creating the printing press, Gutenberg had certainly made cheap bibles, but more significantly, he had devised a tool that allowed anyone with an idea - anyone, with any idea, to publish and hence to distribute and 'share' (long before it was a Facebook term) their ideas or scientific discovries or philosphies or politics or anything else with the rest of the world.

Nothing like this had ever happened before.  Nothing. And it woudlchange the world forever.

The ramifications of this democratization of information would turn the world upside down, and Eisenstein devotes most of her books to explaining just what happened, but one paragraph stood out to me this morning.

Thomas Jefferson, reflecting on the implications of the printing press (for this was the basis of the First Amendment) noted that prior to the printing press, precious and powerful documents were kept under lock and key. In many ways, the 'power' of those documents was in the very secret nature of their uncertainty.

The advent of the printing press changed everything. It moved the power transmitted by documents from secrecy to the public domain.

Thus, the Constitution was printed and reproduced and distributed throughout the new nation so that everyone could see exactly what it said.

The notion that valuable data could best be preserved not under lock and key but rather by making it public was an entirely new concept, and of course, what followed, was the notion of an open and transparent government.  Public discourse was very much now in the hands of the public, and so the First Amendment no only guarantees Freedom of the Press, it also, by direct connection, guarantees Freedom of Speech and Freedom of Assembly.

When the Constitution was written in 1789, the term press meant the printed word. Technology has changed that.  Today, the power of the press is far more vested in video and televison than newspapers.  And, until now, it was pretty much impossible for the average person to 'print' and disburse their ideas in video. That 'power' was concentrated in the hands of a few massive media companies.

However, with the iPhone or smart phone, it is not possible for anyone and everyone do 'publish' their ideas in video and distribute them to the world - for free and with no corporate fetters or censorship.  The smart phone plus the Internet.

This is a remarkable moment of transformation- just like the printing press.

And, as Jefferson noted more than 200 years ago, this democratization of the media also will move important information from the realm of the 'secret' to the public - and a much better place for it to reside.