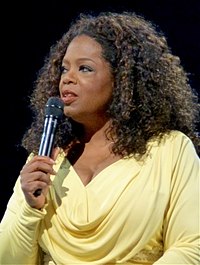 Want To Have Your Own TV Channel?

What has Oprah got that you don’t?

Well, for starters, she has $4 billion.

On top of that, she has rich and powerful friends, the ability to bend public opinion and she gets invited to all the best parties, among other things.

Now, Oprah was not born rich.  She was, in fact, born as Orpah, after the character in the Book of Ruth, but so many people mispronounced it that the Oprah name stuck. She was also born to an unmarried teenager, Vernita Lee, who worked as a housemaid.  So how did Oprah do it? How in the world did she acquire so much wealth and power. What was her secret?

You can find the answer in a speech that the fictional TV anchorman Howard Beale gives in the movie, and now very successful Broadway show, Network, starring Bryan Cranston.  Late at night, Beale hears a voice directing him to tell ‘the truth’ to the world.  Beale asks the voice, ‘why me?’ and the voice replies:

"Because you're on television, dummy!

And that is how Oprah amassed her fortune. Because she was on television.

Being on television gave Oprah the platform she needed and the medium she needed to get in front of millions of people, over and over. For someone who grew up wearing dresses made of old potato sacks, television has been very very good to her. What Oprah did, you can do too.

Now you also have the TV station, the equipment, the studio and the means of distribution, and it’s all in your phone. So far, so good. But just making videos and  throwing them up on YouTube or Facebook is not going to turn you into Oprah. In fact, for the most part, it’s not going to make you a dime; or at least it is going to be extremely difficult.

There are an estimated 1.8 billion users on YouTube.  There’s always a lot of chatter about YouTube millionaires, which of course, is possible, but rather difficult to attain.  Recently, Forbes magazine, the same people who publish the list of billionaires, also published the list of YouTube millionaires; those who make a $1 million a year or more though their YouTube channels.  There were 25 of them

At the top of the list was PewDiePie, or actually Felix Arvid Ulf Kjelberg, a 30-year old Swede who has been putting content on YouTube since 2010.  His estimated revenue from his YouTube channel, with more than 5 billion views is $12 million annually. Not bad, but not exactly Oprah numbers.

Number 25 on the YouTube Millionaires’ list was Lucas Speed Eichorn Watson, who goes by the name of SpeedyW03.  He mostly comments on video games to his more than 6 million followers. He clears just north of $1 million a year in revenue. Not bad for a 28-year old who recently stated: “The earth is flat. NASA does not want you to see this picture.” Draw your own conclusions.

Now, let’s look at this objectively.  There are 1.8 billion users, uploading some 500 hours of video to YouTube every minute.  Of those, there are, according to Forbes, 25 millionaires. Thus, your odds on becoming a YouTube millionaire are an astonishing 0.00001388888% or about 1:100 million. The odds on wining the NY State lottery, in which you pick 6 numbers at random out of 49 choices offers you far better odds at 1:14 million.  And playing the lottery requires a whole lot less time and effort than aspiring to be a YouTube star, which can mean working 14 hours a day, 7 days a week, creating and posting videos.

YouTube’s system of paying its video content producers is both complex and opaque, but here are the basics.  You must have at least 1,000 subscribers to qualify for an ad revenue share.  You also need a minimum of 4,000 hours of aggregate viewing time of your videos over a year.  Already this is a lot more work that just filling in six circles on the lottery ticket. But if you want to go through all the effort and expense of making those videos, fine. Those aren’t terrible barriers to overcome. If no one wants to see your stuff, you can’t really expect to get paid.

If you are popular enough to pass that barrier, then you can start to look forward to a revenue share for advertising that gets appended to your videos.  YouTube takes 45 percent of any ad revenue off the top, and of what remains, you can look forward to receiving anywhere from ten cents to $10 per 1,000 ‘monetized’ views.  Only 40 to 60 percent of views are worthy of being considered monetized views, that is, the revenue is variable based upon factors such as the location of the viewers and their ‘level of ad engagement’, that is, do they click out or stick with it. Are you with me so far?

To cut to the bottom line, the top 3 percent of YouTube viewed channels, that is, those that receive 1 million to 2 million views per month will typically earn $16,800 a year, based on a recent article in the Financial Times.  And, according to the same piece, the top 3 percent scooped up 90 percent of all views.

To add to that rather bleak assessment, YouTube itself admits that most of the monetized channels make less than $100 a year, and 90 percent of those actually make less than $2.50 a month.  You are not buying private jets or ranches in California on those kinds of numbers. You aren’t even buying lunch.

So what do you do?

You start your own TV channel, on your own site.

And how do you make money?

We answer that one in Part 2, tomorrow.